Skip to content
Search
Close
Last summer we went camping at a state park in Ocean City, WA, called Ocean Shores.  Now, it was mid-July.  Mid-July in Seattle is pretty beastly hot.  So we wore shorts, took our bathing suits, and didn’t take sleeping bags.  I know you have already realized what happened…it was windy and cold the whole weekend!  After the first night we went to a Wal-Mart nearby and bought jackets and blankets.  While I was shivering in the tent, I realized that Chris’ alpaca sweater, double-stranded as it is, would be PERFECT to stop the wind on occasions like this.  I made up my mind to knit myself a sweater just for camping trips.
Later that weekend I considered the fact that Colinette was on our upcoming UK trip, and decided to buy yarn at Colinette to make the camping sweater.
During the UK trip I also realized that the visit to Colinette was occurring on our 10th wedding anniversary.  So I, ha ha, decided to buy myself even more yarn.  What a surprise.
Anyway, after Thanksgiving I started this sweater.  It’s a basic boxy shape and was intended to have long, set-in sleeves.  The body of the sweater was quite easy to knit, no problems at all except that I’d expected the hem to roll up, rather than fold up, which is what it does.  I blame the yarn change from Silky Chic to the Cadenza/Jitterbug combo.  But this doesn’t bother me.  I’m going to be camping, right?
Well, the real problem was with the sleeves.  I knit a sleeve in the round, even though the pattern was written to knit flat.  I always do my sleeves in the round.  For some reason I did not get gauge, and ended up with a sleeve that would cover the trunk of an old sequoia!  So I ripped it out and knit a sleeve flat.  This one came out too small!  I was really baffled…wouldn’t you be?  So I set it aside for a while and worked on other things.  In the end (wanting to complete the sweater) I simply picked up stitches around the arm hole and knit down.  This is why the sleeve looks so dorky.  Set-in sleeves don’t really work well when they’re evenly-knit from the top.  But this doesn’t bother me.  I’m going to be camping, right?  Right.
So, here it is in all its goofy-sleeved glory, the Colinette-Anniversary-Camping Sweater.  The color is called Paintbox.  The edges are knit with Silky Chic, and the body is a combo of Cadenza and Jitterbug held together on size 9 (5.5mm) needles.  Inspector Bickie likes the seaming.

All right, after several more false starts I was finally able to revamp this necklace today.  Here it is. 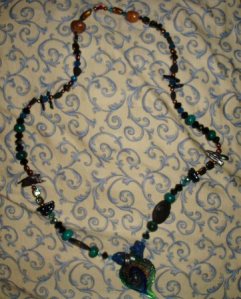 It’s considerably less monstrous than previously.  Mostly this is because of the focal bead being more themed and less contrasty, but also because it’s shorter.  I’m happy with it.  This one’s not for sale.

Back to top
The US Picks
Blog at WordPress.com.