Skip to content
Search
Close
Ah, when I was younger "videos" were so simple…just sit around watching MTV and hoping for a Duran Duran video to come on.  These days, video games are so involved they almost seem like work (to me).  Alex has a new game called "Little Big Planet" (for the PS3) which is a platformer; users start out as a basic ‘sack boy’ (animated puppet made of brown knitted fabric) and can unlock and earn various goodies and gizmos to use on future levels, including new costumes to wear and items to use when building their own levels.  Yes…you can build your own course, and share it online for users all over the world to try!  Alex and I collaborated on a basic race course level the other day.  If you’re an LBP’er, look for "Blue Monkey Race Track" by TitanDamocles.
Meanwhile, above is a short movie of Alex’s sack boy in his Patapon costume.  (Patapon is another Sony game, which Dad owns – my Dad, not Chris Dad, as we say – and Alex has played.)  He starts off the level as a Patapon sack boy and then towards the end he changes to a sack boy with a pink babuschka and then into a sack boy modeled on "Solid Snake" from the grownup’s video game "Metal Gear Solid."
We pause for a moment to bring you this shot of Chris’ delightful new boots by New Rock. 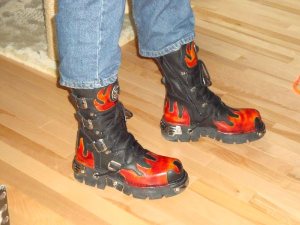 Today’s project was to make myself a circular needle case.  I’d gotten quite tired of storing needles in their baggies in a shoe box – not to mention the baggies were all ripped and the cards inside bent – and I have an irregular collection of needles consisting of Addi Turbo, Addi Lace, ebony, rosewood, and osage orange from several brands.
During last night’s knit night, Rebekah helped me choose some scrapbooking items for my vision.  I started with an 8×8 post-bound album which was not only pretty, but had a convenient space on the front for me to put the word "Needles"!  (Just in case I ever forget what’s in it, I guess…)  Inside, I simply replaced the generic white papers that were inside the page protectors with pretty colored paper that mostly matched the album.  A sticker on each page tells me what size needle is in there, and then the needle gets slipped into the page protector.  Easy, pretty…and yet, this made an enormously thick binder once the needles were in it.  Luckily I had a bunch of post extenders, so I used a stack of three to enlarge the binding.  It’s still just a smidge too narrow for the contents – and I didn’t even put my size 13 (and up) needles into it, or my one pair of old Boye flex needles, or my Addi stitch holder.
But I was also worried about the possibility of needles slipping out of the page protectors when the book is in transit.  So I added a ribbon tie that goes around the entire exterior of the album; this allows me to tie it tightly enough to squeeze the covers down to match the width of the binding, and thus helps keep the page sleeves tight, so the needles won’t slip out.
Yes, I tested it!  I shook it all around while upside down, and no needles even appeared to be budging.
This was fun, so I might make some to sell on etsy.  I don’t have need or desire for intense scrapbooking, but creating the empty book was easy and fun. 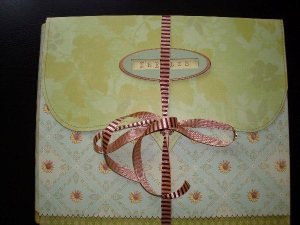 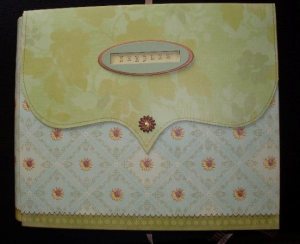 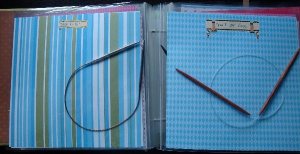 A beautiful day here in Seattle, so we went for a ride to North Bend to investigate this small, yet exceedingly picturesque, nature walk.  At first – in the parking lot – we were very worried about crowds, because there was only one parking space left, but it turns out that there are two trailheads there.  One is the Asahel Curtis nature walk and the other is the Annette Lake trail (which is a longer and more difficult trail).  So there was nobody on the nature walk but us!  We took the opportunity to get a lot of really pretty photos. 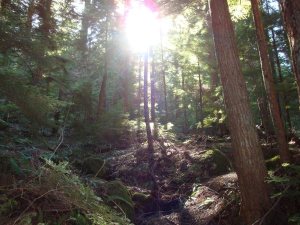 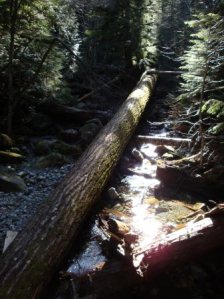 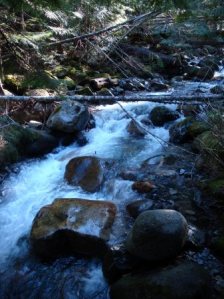 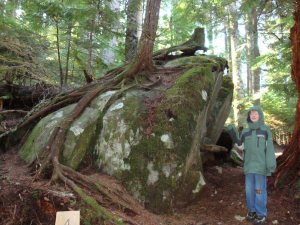 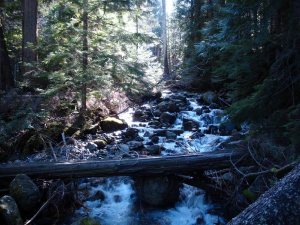 Afterwards, realizing we were almost out of gas, we hotfooted it (leadfooted it?) to North Bend, where we got gas, ate lunch at Twede’s Cafe, and shopped extremely briefly at the outlets, before coming home.

Next week, we will seek out a longer and more challenging hike.

That other 5% is winning the argument!  I’ve started a new project – designing an empire-style dress – and it seems I just can’t be bothered to go back and work on old projects.
Yes, 95% of my inner knitter is urging me to rip out those sleeves and try again with the proper shape.  Also to fix the neckline.